Letter from Sportster pilot: Marty, I am thankful I learned to fly gyros in your Sportster design. Jerry Blaskey.

Letter from SAA: I read the comments from various people relative to the use of the horizontal stabilizer and of course the need for one. It certainly makes sense in reading it and in your comments as well as those of others. Paul Poberezny,

Letter from Piasecki Aircraft Co:
Your book “Modern Gyroplane Design” is simply a pleasure to read and you have made a very tough subject very understandable. In helping to explain our performance numbers in our solicitations, we would like to include a copy of your book as supporting documentation for one of our reports. We feel strongly that members of the board who will be evaluating our technical report could make great use of your text. We are quoting it routinely in the body of out text. Chuck Jarnot.

Letter from Bumble Bee Builder: I want to thank you for the fine window into the gyroplane world, provided by your Flying….. and Designing….. the gyroplane books and the Bumblebee plans!  Your dedication, vision and persistence sets the Wright kind of example for others.
Unfortunately for me I put my gyro interests on hold for a while since the gyro community seemed to be confused about the horizontal tail issue. Had I studied your materials harder, I would not have needed to.  I am building on a fixed wing but can also start the Bumble Bee as it doesn’t require much hanger room. Bill Shamblin.

Aircraft designs, Inc. sells plans for two gyroplanes, both have an excellent safety record. Flight reports of the Sportster and Bumble Bee are presented in Flying the Gyroplane. For those interesting in designing gyros, the book Modern Gyroplane Design is the only book in the world on this subject.

The Sportster is the word’s first two place, experimental, gyroplane. It first flew in 1974. The Sportster is powered by a 160 hp Lycoming 0-320 engine. It is enclosed and designed to carry two large people. Seating is side by side with dual controls for flight training. Many Sportsters have been built and hundreds of people have learned to fly in the Sportster or derivatives of the Sportster. Structure is bolt together aluminum. The Sportster has the safest flight history of any gyroplane in the world. Price for well detailed plans is $535. Plans include drawings for tow hitch, prerotator, and rotor blades. 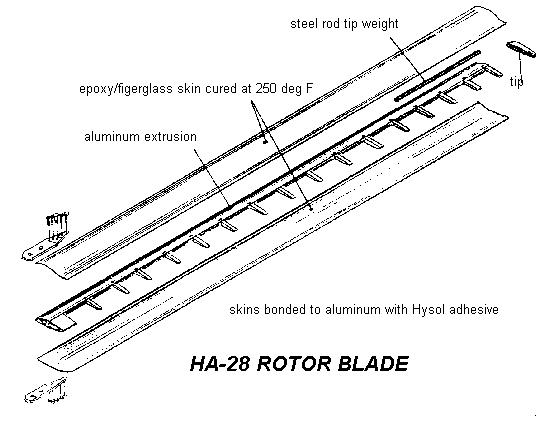 Construction of the Sportster rotor blades is shown above. These are the largest blades for a two place gyroplane. A 9 inch chord is used and a rotor of up to 30 feet can be used. The aluminum ribs are riveted to the aluminum leading edge extrusion and fiberglass skins are bonded to the metal structure. A special adjustable hub is used. Blades are not available.

The Bumble Bee was designed, built, and flown by ADI in 1983. It is the world’s first ultralight gyroplane. The Bumble Bee is one of the few ultralight gyroplanes on the market. It uses a prerotator to spin the rotor blades up to 300 rpm on the ground. Once the blades are up to speed, the take off distance is 230 feet on a calm day. It is powered by a 40 hp Rotax or Kawasaki engine. Flight speed ranges from 15 to 70 mph. Construction is bolt together aluminum tubes. Price for plans is $250. Plans include prerotator, blades, and trailer modification to transport aircraft. For a free copy of the BUMBLE BEE PERFORMANCE AND STRESS REPORTS. 2.2 MB .pdf file, Click here.

Murray Goossen from Canada just (2008) sent a letter stating that he now has 650 hrs on his BB. He writes: The machine is now settling in as far as maintenance is concerned. Their are things that wear but this is normal. The nose wheel lock is a little awkward. Rotorhead and pre-rotator very good – the belt tensioner pivot was beefed up some time ago about 70 TT. Its a little loose now and will need some attention. Empennage is trouble free. Brakes were changed to Gerdes hydraulic before the first flight and remain unmodified. The throttle quad was doubled up to inlcude carb heat, is twice as fat and works well. Your designs have a simple elegance to them and it appreciated. regard –  Murray Goossen

Martin,
Over the last few months, I have taken advantage of all the information one can find on gyrocopters and the industry over the last thirty plus years. I have read your publications, books by Paul Bergen Abbott, PRA magazine, and many of the comments on the web’s Rotary Wing Forum. I have found much good information as well as opinions, egos, rivalries, self-appointed gurus, etc. But, through it all, you are the only one in the past 40 years that has written a book specifically on small gyroplanes and has designed, built and flew both of them, plus still offering a class on gyroplane design.
This puts you in a unique position to further advance the gyroplane into the 21st century, which leads me to why I am writing this email to you.
As a new gyroplane enthusiast, you have the only plans-built, two-place, side by side enclosed gyro on the market today. Yes, there is the SparrowHawk, RAF 2000 and Air Command, but these are kits. The SparrowHawk is $50,000 with a used engine, the RAF 2000 is dangerous without modifications, and the Air Command is underpowered and not enclosed. Sportcopter in Oregon is coming out with a new side by side model, for a whopping $60,000 without the engine.
Many of us don’t want, or cannot afford a $50,000 to $100,000 gyroplane. EAA and PRA have moved away from the basics of building from plans. I have built two airplane fuselages out of 4130 tubing and enjoy working in that material. Plus, the new generation of gyroplane pilots are demanding stable, safe machines. I would rather have steel tubing around me than composite.
I want to build a Sportster that combines old technology with what we now know about stability, safety, and engine and material choices for the homebuilder.
I believe that many more like myself are craving for a plans-built, two-place, side by side enclosed gyrocopter that incorporates the new design parameters and selection of materials. Rich Nuttall

Martin Hollmann designed the Kerry Gyroplane in June 1989 as shown on the left below. Many years later, Don Farrington produced a gyroplane called the Twin Star. As can  be seen, the empennage of the Twin Star was a copy of the Kerry Gyro. 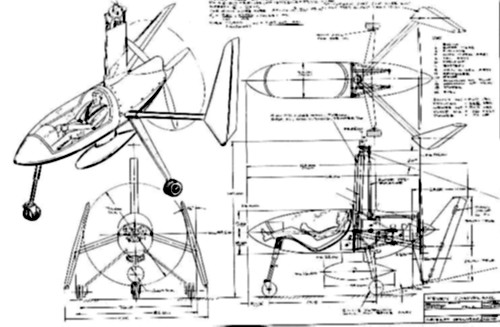 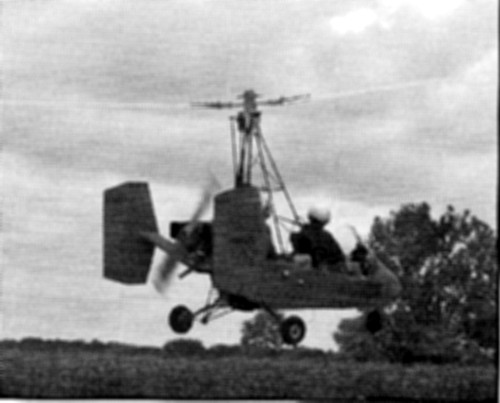